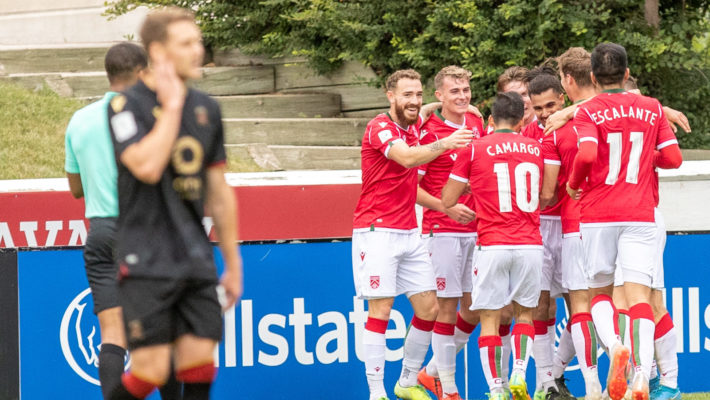 This weekend’s ComeOn! Game of the Week saw Cavalry FC host Valour FC in what turned out to be a close affair.

How the game panned out

Cavalry FC came out on top 1-0 win over Valour FC at ATCO Field at Spruce Meadows with Mo Farsi scoring the only goal of the game. Calvary are now one point off top in the CanPL standings and hand Valour their fourth defeat in a row.

Valour has suffered a substantial drop off in form following The Kickoff in Winnipeg. Sunday was Rob Gale’s fourth straight defeat.

Despite the lack of goalmouth action in the game, Valour boss Gale was quick to find positives:

“I thought we played really well – the goal comes from the sub coming on and not playing the role,” Gale said, recalling Tony Mikhail’s first half addition after Rodrigo Reyes’ injury. “We came out here and played football, didn’t we? We didn’t park the bus.”

“It’s really small margins,” Gale said. “It could have gone our way – we had a couple of breakaways brought back by the officials, instead of playing advantage.”

A trip to Edmonton is up next for Gale and co.

“It has been difficult, we’ve gone to some tough places,” Valour’s captain on the day Daryl Fordyce said. “When we were home we were ourselves. We’re just gonna have to knuckle down and get on with it.”

Cavalry riding high in the CanPL

At the other end of the table, Cavalry went within a point off the top of the CanPL standings. Tommy Wheeldon Jr.’s side is top of the form table with four wins from their last five games.

“We’ve expended a lot of energy in previous seasons leading from the front. It’s a tough position to be and when really you only ever judged on the final game.”

CanPL.ca Player of the Match

Mo Farsi took his chance superbly well and capped off a sturdy performance on the right, making a team-high 37 passes and 72 touches.