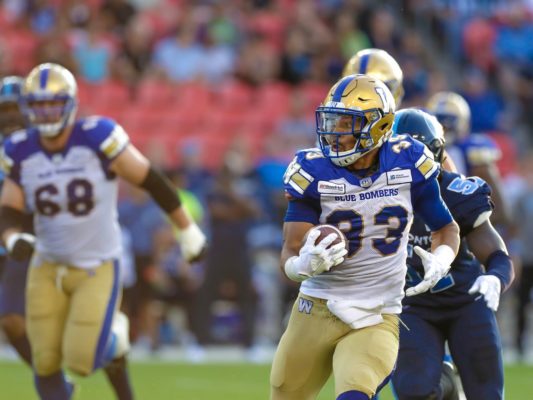 Labour Day Weekend is always one of the best of the CFL regular season schedule, and this year was no exception. If you like offense, there was a lot more of it this week compared to others. Three teams eclipsed the 30-point mark for the first time this season, including a 51-point performance on Friday night.

The Montreal Alouettes broke out for the biggest offensive night of the young CFL season, with a 51-29 victory over the Ottawa Redblacks.

Vernon Adams Jr. threw for 288 yards and 4 touchdowns for the Alouettes, completing 18 of his 23 pass attempts, and recording 0 interceptions. Eugene Lewis and Jake Wieneke were his top targets, tallying 120 and 118 yards, respectively, and 2 touchdowns apiece. Running back William Stanback ran for 112 yards on 15 carries.

The Als were able to make plays on defense as well, creating 4 Ottawa turnovers, including 3 interceptions and a pick-six courtesy of Patrick Levels.

Adams Jr. was feeling good about his game following the win.

“I really had fun man. I was really myself and I was out there pumped up and ready to go. I saw the field clearly and receivers were making great plays for me.”

Montreal improves to 2-2 on the year, while Ottawa falls to 1-3.

The Riders suffered their first loss of the season as the Bombers surpassed them for first place in the CFL with the win.

Winnipeg’s defense was the story in this one, as they forced 5 Saskatchewan turnovers. Riders quarterback Cody Fajardo threw 3 interceptions after having thrown just one through his team’s first three games of the season. The 29-year-old was blunt in expressing his frustration after the game.

“It was tough and it was probably the worst game that I’ve played as a professional.” Fajardo said.

Zach Collaros’ 245 passing yards and Andrew Harris’ 95 rushing yards would prove to be enough for the Bombers on the other side of the ball.

The Riders scored all 8 of their points in the second quarter, taking an 8-7 lead into the half, and trailing just 13-8 heading into the fourth. However, a 27-yard Nic Demski touchdown catch would highlight a 10-0 fourth quarter in favour of Winnipeg, as they pulled away for the 23-8 win.

Winnipeg improves to a CFL-best 4-1 on the year while the Riders fall to 3-1.

Dane Evans passed for 248 yards and 2 touchdowns as the Hamilton Tiger-Cats defeated the Toronto Argonauts on Monday afternoon.

The Ticats built a 25-4 lead heading into the fourth quarter after a 67-yard punt return touchdown from Frankie Williams and a Tim White touchdown catch. Toronto would make a push with a pair of fourth quarter touchdowns but a Simoni Lawrence pick-six with 5:14 remaining would seal the deal.

Evans admitted that Labour Day Weekend is not just like any other regular season game.

“We talk about every game is just the next game… and then you get to Labour Day,” he said. “When it’s Labour Day week, we emphasize, ‘It’s Labour Day. We don’t lose here on Labour Day.’”

The win marks seven-straight Tiger-Cat victories over the Argonauts on Labour Day.

Toronto and Hamilton now both sit in a three-way tie with Montreal for first in the CFL East, with a record of 2-2.

The second half of Monday’s double-header featured the Calgary Stampeders and Edmonton Elks from McMahon Stadium.

Trevor Harris had a monster night under centre, passing for 398 yards, 4 touchdown and zero interceptions for Edmonton. Five Elks receivers racked up 48 yards or more, including Mike Jones who finished with 107.

“Everything’s about us as a team,” Harris said, following the game. “I don’t know if we made a statement, but I know what we’re capable of and I know we’re finally starting to scratch the surface.”

Stamps quarterback Jake Maier did not make things easy for Edmonton, however, putting up some nice numbers of his own: 328 yards, a touchdown and no interceptions. Kamar Jorden was his top target with 9 receptions and 123 yards.

Edmonton built a 14-3 lead mid-way through the second quarter but the Stamps would chip away at the lead and eventually find themselves ahead by a score of 20-17 early in the fourth.

That is when Harris and the Elks offense stepped up, finishing back-to-back drives with Harris touchdown passes. Calgary would push the ball into Edmonton territory, trying to put together a late comeback effort. However, they would turn the ball over on downs at the Edmonton 31-yard line with 1:27 remaining, giving up any hope they had to get back in the game.

Edmonton improves to 2-2 with the win while the Stamps fall to 1-4; the worst record in the CFL.

Week six will feature three rematches from Labour Day Weekend: Hamilton at Toronto on Friday, and Saskatchewan-Winnipeg and Calgary-Edmonton each on Saturday. The Redblacks and Lions will complete the Saturday triple-header with a late matchup from Vancouver, while Montreal gets their second and final bye week of the CFL season.