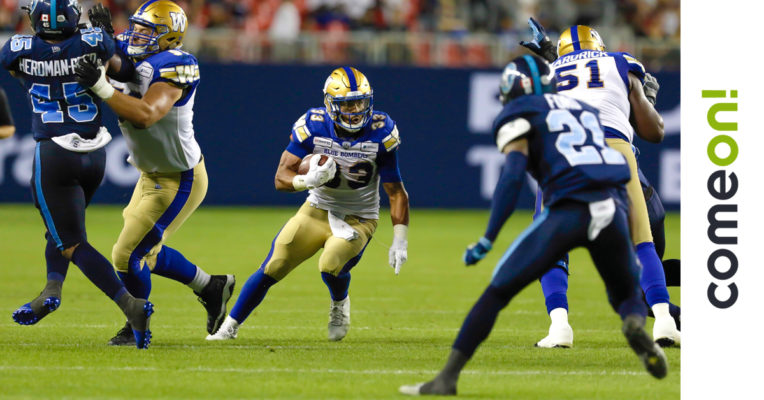 Another week of CFL football is in the books. Week nine featured four games including a pair of nail-biters on Saturday. The Toronto Argonauts got the bye week, with the remainder of the league’s teams in action this past weekend.

The East-worst Ottawa Redblacks picked up their first win since week one with a 34-24 victory over the Edmonton Elks on Tuesday. Ottawa now sits at 2-5, with their only wins coming against Edmonton.

The Elks now also find themselves at the bottom of their division with a 2-5 record after starting the season 2-2.

Rookie quarterback Caleb Evans threw for 191 yards, 3 touchdown passes and no interceptions in his first-career CFL start, while also leading his team on the ground with 59 rushing yards. RJ Harris was his top target through the air, finishing with 80 yards and 4 receptions.

On the other side, Elks quarterback Taylor Cornelius threw for 334 yards and 3 touchdowns but two timely interceptions to Antoine Pruneau and Brandin Dandridge would prove to be costly mistakes in the Edmonton loss.

“Hats off to the kid. It’s not easy to step in and play a professional football game without ever playing in a pre-season game. Three touchdowns, no interceptions, just an outstanding game.”

The Winnipeg Blue Bombers continue to separate themselves from the rest of the CFL. They came into Vancouver on Friday night and embarrassed a solid BC Lions team in front of their own fans. The Bombers have now won five-straight games, with most of those wins coming in dominant fashion.

This game was the Zach Collaros and Kenny Lawler show. The Lions defense was no match for the quarterback-receiver tandem. Lawler racked up 205 of Collaros’ 417 passing yards, on 12 receptions and a touchdown. Collaros completed 28 of his 33 pass attempts to go with 2 touchdowns.

Andrew Harris added 81 yards on the ground and the Bombers defense held strong, holding BC to just three field goals and no touchdowns as Winnipeg came away with the easy 30-9 victory.

“When I come here its personal,” Lawler, a former Lion, said after the game. “I just try to hold myself to the highest standard and make the most plays possible so that the whole league and BC knows.”

Winnipeg now holds a two-game lead on the rest of the CFL for first-place with a very impressive 7-1 record. BC falls back to .500 (4-4) with a second-straight loss.

The Montreal Alouettes escaped Hamilton with a wild comeback overtime victory on Saturday afternoon; one of the best finishes to a CFL game this season. After trailing 17-3 to start the fourth, the Als came soaring back behind a pair of Vernon Adams touchdown passes and a David Cote field goal to take a 20-17 lead with 29 seconds remaining. However, the Hamilton Tiger-Cats were not done yet. They would manage to squeeze in three quick passes to get within field goal range, setting up Taylor Bertolet for a game-tying 55-yard field goal. As time ran off the clock, Bertolet’s kick would bounce off the crossbar of the uprights and through.

The Ticats began with possession in overtime but a Sean Thomas-Erlington fumble recovered by Montreal would put the Als in the driver seat to win this game. A few plays later, Cote would nail a 36-yard field goal to give Montreal the 23-20 win.

Adams finished with 209 yards and 2 touchdowns for Montreal while Jeremiah Masoli threw for 233 yards in the Hamilton loss.

Adams praised his team’s never-quit attitude after the game.

Montreal improves to 3-4 on the season while Hamilton falls to 4-4.

The Calgary Stampeders hung on for a 23-17 victory over the Saskatchewan Roughriders on Saturday night. The loss marked the first for the Riders to a non-Blue Bombers team since October 11th, 2019; a game that took place in, you guessed it, Calgary. The Riders had won eight-straight games against non-Winnipeg teams dating back to the 2019 CFL season.

Following two quick Calgary touchdowns to start the game, this one was a primarily defense-dominated affair until the fourth quarter. The Riders would struggle to get much going offensively before Cody Fajardo found Kian Schaffer-Baker for a 71-yard bomb that put Saskatchewan in scoring position. William Powell would find the end zone a few plays later on a four-yard run, and after both teams exchanged field goals, the Riders found themselves down six with 1:39 remaining.

Brett Lauther then successfully recovered his own onside kick in brilliant fashion, giving the Riders a chance to take the lead. However, Fajardo would throw an interception on third down, allowing the Stamps to kneel out the clock and take the victory, 23-17 the final.

Fajardo did not hide his frustrations after the game.

“It hurts because I know we left a lot on the field. I just felt like we didn’t play very good football, offensively. We got it going in the second half but it’s tough to end a game the way it did and for me, I like to stay positive but this one has been tough — very tough.”

Saskatchewan falls to 5-3 on the year, still good for the second-best record in the CFL. Calgary improves to 3-5.

CFL Week ten will feature five games, with the Redblacks in action twice. They will visit the Argonauts on Wednesday to kick off the week. Winnipeg will then host Edmonton on Friday, followed by a Riders-Stamps rematch on Saturday from Regina. Finally, Montreal will host Ottawa on Thanksgiving Monday, followed by Toronto at Hamilton.