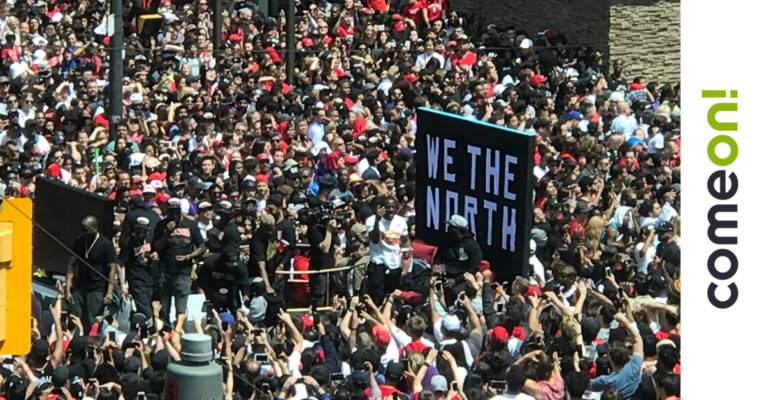 Raptors basketball is back.

The Toronto Raptors hosted the Philadelphia 76ers on Monday night from Scotiabank Arena. The game marked the first time since February 28th, 2020 that the Raptors hosted a basketball game in Toronto; a 585-day absence. The preseason match ended with a final score of 123-107 in favor of the Raptors. They will head to Philadelphia to face the 76ers once again in their second preseason game on Thursday.

Projected to win 35.5 games and listed at 3.80 to make the playoffs, the Raptors are expected to finish somewhere just outside of playoff position this season. These odds reflect a similar outcome to the Raptors’ 2020-21 campaign. However, taking much away from last year’s relocated and injury-riddled season seems unwise. The Raptors do feel like one of those ‘it-could-go-a-lot-of-different-ways’ teams that could feasibly find themselves anywhere between 4th and 12th in the conference when it’s all said and done. However after the team’s first preseason game, there may be legitimate reason to believe Toronto may be on the better end of this spectrum by the end of the regular season.

In losing franchise mainstay Kyle Lowry to trade, Toronto loses someone who was unequivocally largely responsible for the Raptors’ recent success. Goran Dragic, acquired in the Lowry trade, does not and never will fill his shoes, but the 35-year-old veteran will fill the positional void and may serve as a more productive player than some are giving him credit for. Replacing Lowry for Dragic is a net negative but something the Raptors can handle, especially given the fact that Lowry missed extended time last season anyway.

Outside of Lowry, the Raptors did not lose much this offseason. A handful of borderline rotation pieces in Aron Baynes, DeAndre Bembry, Rodney Hood, Stanley Johnson and Paul Watson will not be coming back, but the team’s main core of Fred Vanvleet, Pascal Siakam and OG Anunoby will be returning. Canadians Chris Boucher and Khem Birch as well as Gary Trent Jr., Malachi Flynn, Yuta Watanabe and Freddie Gillespie will also remain with the team. Rounding out the core will be additions Precious Achiuwa, also acquired in the Lowry trade, and rookie fourth overall pick Scottie Barnes.

Scottie Barnes to win Rookie of the Year: 13.00

When comparing this roster to last year’s, the team’s improved depth becomes apparent. To oversimplify, the Raptors took one step back and three steps forward in this department. Lowry leaves, and they bring in three guys in Dragic, Achiuwa and Barnes, who may not account for all of Lowry’s lost value, but will all play significant minutes and make an impact this season. However, it is not just the added numbers that will help Toronto next season, but rather what these guys bring to the table.

Among their top top ten rotation players, the Raptors have six players that fall into the 6’7″ to 6’9″ height range. Defensively, this gives the Raptors a limitless selection of lineups they can go to. Anunoby, Siakam, Achiuwa and Barnes can all guard most, if not all, positions on the floor. As one of the best perimeter defenders in the league, Fred Vanvleet can serve as the first line of defense in most lineups, and Boucher and Birch can comfortably fill in at center and/or power forward when need be. Mathematically, head coach Nick Nurse has a lot of different lineup options, and the athleticism, versatility and defensive upside of most of them is off the charts.

OG Anunoby to win Defensive Player of the Year: 81.00

If defense alone is not enough to propel this team into a playoff spot, offense will be a bigger question mark. With some justified concerns around shooting and play-making, this could be the side of the ball that hurts the Raptors. However, the defensive versatility does allow for Nurse and the coaching staff to have some more freedom experimenting with different lineups. Whichever pairings do work out for the Raptors offensively, they will probably be worthy on the other end of the floor as well.

“I think when you start looking at some of the athleticism, speed and just the size of guys in different places, we should be very versatile,” head coach Nick Nurse said ahead of the season. “That’s one of my themes for the year. We should have guys that can play a lot of different ways on both ends of the floor.”

It will be really interesting to see how Nurse utilizes Siakam, Barnes, Anunoby and Achiuwa; four guys that have tremendous size, length and athleticism, yet can also handle the ball and make good decisions. You can definitely expect some really exciting transition plays, quick passes, give-and-go’s, and of course, rim-rattling dunks from these athletes.

The Raptors are probably not going to win a championship this year. Some of the same areas that hurt Toronto last season will likely cause problems again this season, but location can be ruled out of the equation, and hopefully health problems as abundant as last year as well. The Raptors will be looking to redeem themselves after missing the playoffs for the first time since 2013. They have a shot if all of the pieces fall in place and with so many different schematic options, surely something will work, right?